On June 18th, 2019 OeKB CSD invited its clients to the Participant Meeting. The agenda was assigned to securities & cash account holders; the venue was OeKB CSD's premises at Strauchgasse.

Georg Zinner, Managing Director, welcomed all participants and presented the current business facts & figures of the safekeeping and settlement volume of OeKB CSD.

Peter Felsinger, Managing Director, informed about the User Committee of OeKB CSD. The duty of the User Committee is to advise the management of OeKB CSD on relevant issues. The committee, consisting of four representatives of security account holders and three representatives of issuers, meets several times a year and is convened by the chairman. Peter Felsinger also mentioned the composition criteria that entitle them to be appointed. Moreover, he also informed about the period of the nominated committee and about the representatives of the respective institutes. OeKB CSD will provide the meeting protocols in the client related section My OeKB CSD.

The focus of the Participant Meeting was on the Settlement Discipline. Kurt Kerschbaum, Head of Accounts & Settlement, explained in detail the legal basis and the current timeline. He continued with the requirements for investment firms. Furthermore, he stated the requirements CSDs have to deal with and announced that OeKB CSD would amend its General Terms & Conditions accordingly. OeKB CSD has already implemented some aspects, others are still beeing analysed or in progress within the project scope, some aspects have to be coordinated with the public authorities. Furthermore, Kurt Kerschbaum gave a brief insight to the current state of the penalty mechanism, however, mentioning that they could still change.

Another item on the agenda of the Participant Meeting was the status of the Shareholder Rights Directive (SRD). Harald Seisenbacher, Relationship Management Issuers, informed that the SRD deals with several topics. Relevant for OeKB CSD though the identification of shareholders, the transfer of information as well as the facilitation of the excercise of the shareholder's rights and engagement. There are some outstanding issues that have not yet been resolved; the timeline shows that level 2 of the SRD will come into force on September 3rd, 2020. In addition, he mentioned the status at national level and in general (Europe).

In conclusion, Peter Felsinger referred to the Eurosystem Collateral Management System (ECMS) and explained that it is a platform, provided by the Eurosystem, for the purpose of harmonizing the processes of collateral management and the settlements of corporate actions.

At the Participant Meeting, OeKB CSD does not only inform about current events and new enhancements, they are also available to answer questions clients may have. This is a good opportunity to exchange directly with the management. 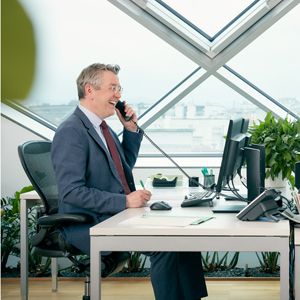